– NCL's Video Series Highlights the Easiest Way to Travel by Showcasing the People, Places and Passion Behind the NCL Experience –

MIAMI, June 30, 2022 /PRNewswire/ -- Norwegian Cruise Line (NCL), the innovator in global cruise travel with a 55-year history of breaking boundaries, today announced the next season of its visual storytelling platform, "EMBARK with NCL," with the first episode, "Caribbean Adventures," premiering Thursday, June 30, 2022 at 8 p.m. ET at www.ncl.com/embark and on Facebook.

Following its successful first season, which garnered nearly 3 million views and showcased the Company's fierce resiliency as it returned to cruising after a 500-day pause, this second season will focus on the high-caliber offerings onboard and ashore, as well as the most guest-favored destinations, beginning with the Caribbean. In addition, American television personality and world traveler Zay Harding, will bring viewers along this season as the host of EMBARK, chronicling his cruise adventures around the globe.

"EMBARK with NCL allows us to visually showcase the incredible experiences we offer across our dynamic fleet, as well as the unforgettable vacation moments awaiting our guests at some of the most bucket-list worthy destinations around the world," said Harry Sommer, president and CEO of Norwegian Cruise Line.  "This season, our guests will be able to discover, or rediscover, some of their favorite places, and get a sneak peek into the future of NCL with episodes dedicated to our next best-in-class ship, Norwegian Prima."

In season two, guests will have a front row seat to both the onboard experience and the over 300 incredible destinations visited by NCL each year.

"What's most exciting about this new season is the relevancy of the content to travelers who may not be familiar with cruising," said Christine Da Silva, SVP of Branding and Communications of Norwegian Cruise Line.  "Season one provided us an opportunity to connect with loyal guests, as well as those who know us and missed being at sea with us. Season two is all about the experience … about the food, entertainment and the incredible places we visit. We're happy to bring all of the benefits and joy of cruising to anyone who wants to see the world."

This season, guests are invited to discover the majestic islands of Hawaii, when Harding sets sail aboard NCL's Pride of America, the only ship to offer roundtrip inter-island voyages from Honolulu.  They will also witness NCL's culinary champions battle it out in the kitchen in the "Great Cruise Cookoff" episode for a chance to have their creations featured aboard the highly anticipated Norwegian Prima.  In the "Evolution of Innovation" episode, guests will celebrate the brand's storied history as well as glimpse its future as it prepares to launch its next class of ships. In the season finale, Harding travels to Reykjavik, Iceland to attend the event of the season, the Christening of Norwegian Prima.  He will bring viewers along for this history making celebration, where godmother Katy Perry will not only fulfill the longstanding maritime tradition of blessing and officially naming Norwegian Prima, but where she will perform during the Christening ceremony before the new ship sets sail on its inaugural voyages.

To watch the first episode of the new EMBARK with NCL season, "Caribbean Adventures," tune in on June 30, 2022 at 8 p.m. ET at www.ncl.com/embark or Facebook. The episode will be available on-demand, following the livestream premiere.  Additional premiere dates forthcoming. For more information on EMBARK with NCL, or to watch the complete collection of available content on-demand visit, www.ncl.com/embark.

For more information about the Company's award-winning 17-ship fleet and worldwide itineraries, or to book a cruise, please contact a travel professional, call 888-NCL-CRUISE (625-2784) or visit www.ncl.com. 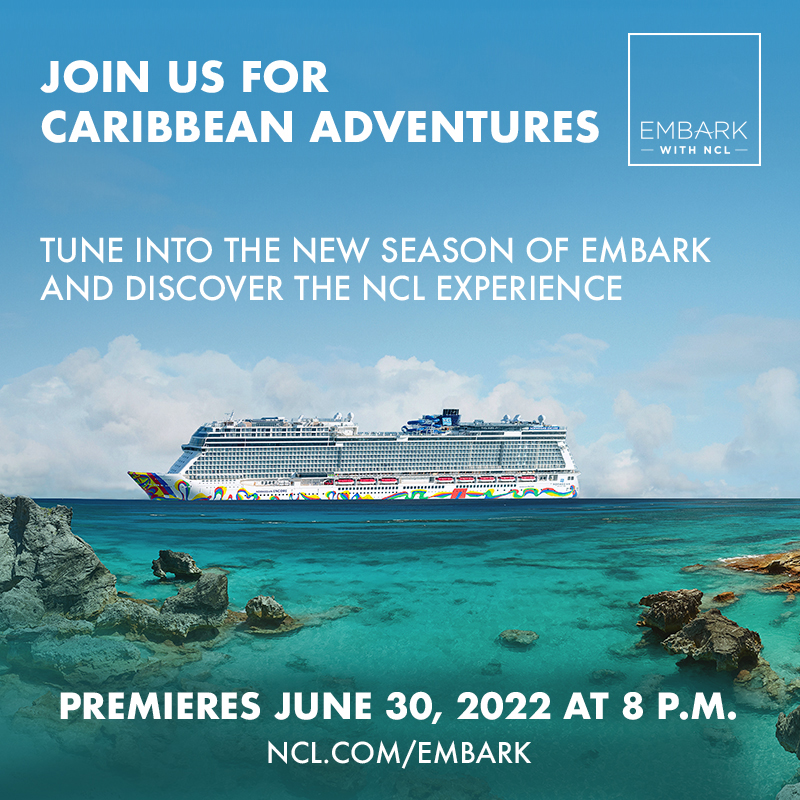